Is ANTIFA more Fascist or more terrorist?
in Politics

PotterWatch 41 Pts September 2017
Okay. So I was recently looking back and what the "friendly neighborhood" ANTIFA folks were doing these past 6 months or so. So far, their actions have led them to be recognized as Fascists and have gotten them officially declared a terrorist organization. So I was wondering which group they belong in more. In other words. Are they the new Fascist regime? Or are the terrorists like their ISIS buddies?

Now, before I go into what I think, allow me to define what each of these are. Let's start with Fascist. If you can't already guess, a Fascist is one who follows the political philosophy of Fascism. This philosophy can be simply defined as such:
"Fascism- a political philosophy, movement, or regime that exalts nation and race above the individual and that stand for a centralized autocratic government headed by a dictatorial leader, severe economic and social regimentation, and forcible oppression of opposition."
First off, they don't care about their country at all, so why would they be considered Fascist in the first place? While that is a good question, one that I have an answer to, it's not the one I want to approach first. A very common belief is that all Fascists are far right wingers. That isn't the case. Yes, there have been a few right wingers who were Fascists such as Hitler and one of the Bush's, however, history show there were more Fascists on the left wing rather than the right. This is simply because Fascism falls under authoritarianism, which can be found in the middle of a political chart. People like Gandhi, Castro, Stalin and Hussein were left wing Fascists. So, keep in mind, it can be on either side. For more information, check out this video:

Now on to the first question that I mentioned. It's true, ANTIFA doesn't exalt America at all, in fact I'd say they despise it with a burning passion. Their hatred of America is so hot, that Satan himself is probably impressed at this point. Anyway. I want you to look at the last line of the definition of Fascism. Notice how it says, "forcible oppression of opposition". In laments terms, Fascists deal with people who disagree with them, by using force. Hitler had anyone who disagreed with his ideals sent to concentration camps and killed. Stalin also had the tendency to kill the people who disagreed with him. Though is hasn't been confirmed that ANTIFA has killed anyone as far as I'm aware, they have used violence against the people they disagree with. There is no shortage of footage of ANTIFA attacking people at free speech rallies, public speaking events of people who are right winged and politically neutral, just because they don't like what the speaker has to say. The down side to this point, is that ANTIFA also has the habit of attacking people who are just there and for some reason, they've even attacked the other well known terrorist organization, Black Lives Matter, or BLM. It's unclear if BLM and those random people who got attacked have views that go against the beliefs of ANTIFA, but I'm sure we can all speculate on the matter. Following below will be two links. One link will contain footage of a brawl between BLM and ANTIFA, the second will be the link to my youtube search of footage of ANTIFA attacks. 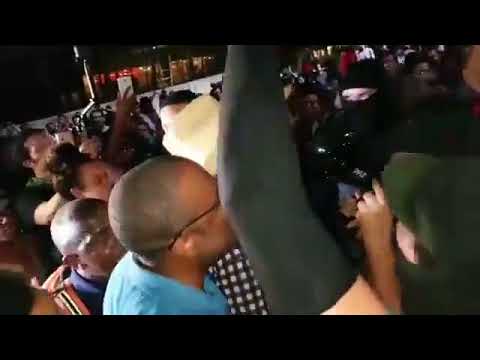 Okay, so now let's talk about terrorism.
"Terrorism- a systematic use of terror especially as a means of coercion"
Now, it seems to me that Fascism go hand in hand when it comes to the use of violence to get people to agree with you and as I said in the last segment, there is no shortage of violence from ANTIFA. There have been multiple people, including New Jersey and the FBI, who have officially labeled them terrorist organizations. And yes, attacking people at random or people who disagree with you for the sole purpose of them disagreeing with you, isn't necessarily terrorism. But throwing bombs into crowds is. In the video below, you'll see ANTIFA throw an M80 in to a small crowd who appears to just be spectating. I know it's not the best example, but I'm sure you guys get the idea. There are quite a few videos of them throwing bombs at people, including one of a member who got arrested for trying to throw a feces/urine bomb.

Personally, I believe they fall under both categories. They show signs of being Fascist and they have committed several terrorist attacks. Either way, they are a huge threat to this country. But that's not the point of this debate, or rather, this discussion. I want to see if you guys think they are more like Hitler (Fascist) or more like ISIS (terrorists). If you think they're both or if you don't think they're either or, that's just fine. Because at the end of the day I'm sure we can all agree that they've broken enough laws to put them in prison for a life time.