What Happens when I Die?
in Religion

What happens when I die?

In The Beginning, on the 6th-Day of Creation, our Creator, Jesus Christ-Yeshua, created mankind in His spiritual image (Genesis 1:26) and endowed mankind with certain attributes possessed by God Himself. One of those attributes is an eternal spirit that will live and thrive abundantly beyond the death of the body constrained by Time and debilitating SIN.

Our Creator has infused Eternity into our heart (Ecclesiastes 3:11) and every man, woman and child is aware of a realm, aware of a life that extends beyond the brevity of this temporary life in Time (Hebrews 13:14) which the Holy Spirit refers to as a “vapor” that fades away like the morning mist (James 4:14). Only the man or woman, having given their hope and their Eternity into the hands of Satan through unbelief, have become numb to the glory that awaits the faithful in our Everlasting God, Jesus Christ-Yeshua (2 Corinthians 4:4).

A Christian’s hope in everlasting life as promised by Messiah-Yeshua/Jesus Christ and the Holy Spirit is not the resultant of fear concerning death of the body for we know that the wages of sin is death (Romans 6:23) but we who love and honor Jesus Christ know that the human eye has not seen, ear has not heard of the unfathomable goodness that awaits those who dwell in the presence of our God who suffered and died so that we could live with Him forever (1 Corinthians 2:9).

“But when this perishable will have put on the imperishable, and this mortal will have put on immortality, then will come about the saying that is written, “Death is swallowed up in victory. O death, where is your victory? O death, where is your sting?” The sting of death is sin, and the power of sin is the law; but thanks be to God, who gives us the victory through our Lord Jesus Christ.” 1 Corinthians 15:54-57 (NASB)

What happens when I die?

2) Death of the faithful in Jesus Christ.

Every man and woman having attained an age of reason/accountability *(Numbers 14:28-30) possessing sufficient cognitive acuity to discern right from wrong, moral from immoral, to discern the righteous decrees (Natural Law) of our Creator as written upon our heart at conception…if this unfaithful man or woman dies in their body of flesh having rejected the pardon from death in sin and Hell freely offered by Jesus Christ-Yeshua earned for them at the Crucifixion, at the point of death of body, the unredeemed/unfaithful in their disembodied spiritual form will be instantaneously translated into the region Messiah-Jesus identifies as Hades-Sheol/Torments (Luke 16).

The disembodied spirit of the unfaithful at the last exhalation of the Earthly body in Time, will enter Hades-Torments fully cognizant, fully aware, fully interactive in the Spiritual World, more so than when constrained in the body of flesh that inhibited full cognition and reality due to the inherent limitations of sin/the fallen-nature/the curse inherited from our father, Adam (Ephesians 2:1-3).

The unfaithful that have been confined in Hades-Sheol/Torments from The Genesis of Time are currently awaiting the Judgment of the Condemned/The Great White Throne Judgment (Revelation 20:11-15) that will manifest subsequent to the Millennial Reign of Messiah-Yeshua that will manifest immediately subsequent to the coming Tribulation Period/the Apocalypse/a nuclear war that will be initiated by Islam-Allah/Satan v. Israel-Yeshua and consume the Nations of the Earth in the coming days.

Prior to the Judgment of the Condemned, the unfaithful detained in Hades-Sheol/Torments will receive a resurrected body of corruption (John 5:28-29) in order that they can stand in the Judgment before Jesus Christ-Yeshua (Romans 14:11; Philippians 2:10-11; Ecclesiastes 12:14). During adjudication, the condemned will be evaluated for the things done in the body while constrained by Time upon the Earth. No one will be found righteous for their works done in the body because God the Father has established an immutable Covenant between Himself and mankind that only by His grace (unmerited favor) through faith (trusting-believing) in His Son, Jesus Christ, and the innocent blood that Jesus shed at the Crucifixion can forgive, redeem, sinful mankind (John 3:16: Acts 4:12); therefore, the unrighteous man and woman at the Judgment of the Condemned, having rejected Jesus Christ as Lord, will be adjudicated “guilty” for sin, their name will NOT be found written in the Book of Life (Revelation 20:15) and they will be forced into the Lake of Fire/Hell/Gehenna and they will suffer for a period of time commensurate with the evil and rebellion performed in the body while constrained by Time upon the Earth; subsequent to this period of suffering, the unrighteous will die a “second death” and cease to exist forever (Revelation 20:14; Matthew 10:28). The “second death” is necessary because God the Father, in His purity-holiness-righteousness, will NOT permit the destructiveness of sin to enter the Eternal Kingdom of God (Revelation 21:27).

Every man and woman having placed their faith in Jesus Christ as Lord and having received forgiveness of sin and having received the indwelling Holy Spirit as the Seal/Guarantor relevant to the Covenant of Grace established by God the Father through the Son, Jesus Christ (Ephesians 1:13), these faithful men and women having trusted in Jesus Christ as Lord, at the point of death of the body in Time, they are instantaneously translated into the presence of God the Father in the Kingdom in their disembodied state that is fully cognitively acute/aware (2 Corinthians 5:8). Those who die with Jesus Christ as their Lord, will serve God in the Kingdom in a variety of occupations and positions as they were prepared for same during the process of Sanctification while in the body upon the Earth (1 Corinthians 6:3; Revelation 1:6 & 5:10).

3) What about babes (unborn/born), children, the mentally handicapped, who die in the Realm of Time?

The Holy Spirit has articulated within God’s Covenant (the Scriptures) that where there is no Law there is no sin (Romans 4:14; 5:13); therefore, babies, children having not attained an age of reason *(Numbers 14:28-30), the mentally handicapped, these lacking the ability to fully understand God’s righteous decrees via the Divine-Natural Law are NOT culpable for sin; therefore, upon the death of the body, these innocent before the Lord are escorted into His presence and they are restored to full acuity and spiritual life in order to enjoy the fullness of joy and peace that is found only in the presence of our loving God.

But Jesus said, “Let the children alone, and do not hinder them from coming to Me; for the kingdom of heaven belongs to such as these.” Matthew 19:14 (NASB)

*Note concerning the Age of Accountability/Reason as per Numbers 14:28-30 being 20-years-of-age. This is an assumption on my part relevant to what the Holy Spirit has said in a particular/specific dispensation. I do not know for certain what age my Lord considers a man or woman or child culpable for sin; I believe that this age varies with each person’s moral maturity and only our God knows that particular age (Psalm 139:2-3). 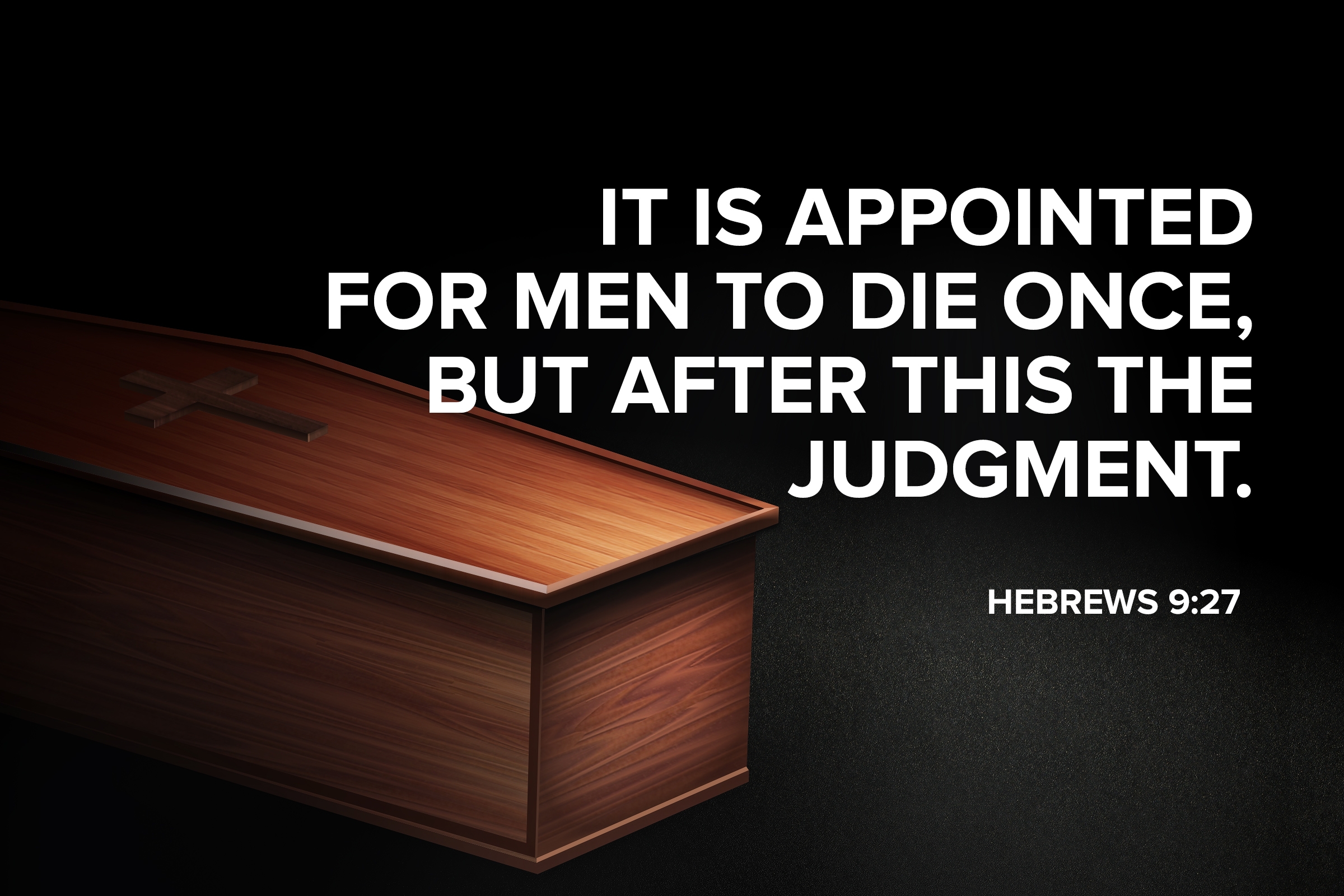 Jesus - it is appointed once for man to die after this the judgment.jpg 1.2M