The Progressive-Socialist-Democrat Party and their god - Allah?

Progressive Socialist Democrat Party and their god, Allah – an overview…

Yesterday, in an OP on FB, I highlighted the mirroring of political ideology existing between the Progressive-Socialist-Democrat Party of the United States and the National Socialist’s Worker’s Party i.e. the NAZI Party. The similarities are extensive and irrefutable. Today, I will identify the god of the Progressive-Socialist-Party as said Party is comprised of those who advocate for the mutilation of babies in the womb; unconscionable sexual perversion and the defilement of God’s Covenant of Marriage; Socialism-Marxism responsible for the death of 100-million people in the previous 100-years; antisemitism and hatred for the Nation of Israel, the Israeli people, Christianity, Christians, the Church, faith, while advocating for Islam and its hatred for Israel and Christianity.

The Purpose of this Article...

I know that the Progressive-Socialist Party in America is primarily comprised of Atheists-Naturalists-Nihilists-Narcissists-Hedonists and their attention span concerning things of Spirit has been decimated by their god, Satan, who has blinded their mind that they cannot see the reality of the Spiritual Realm or their desperate need for God’s love and the forgiveness of sin (2 Corinthians 4:4); therefore, I will not endeavor to explain why God has created Time and human KIND and the incredible scenario that manifest in the Kingdom of God before the creation of Time and why God has placed mankind, Lucifer, upon the Earth. My motivation here is to explain the god of Atheism-Progressive Socialism and bring some clarity to the demonic underpinnings of the Democrat Party in America.
As I pointed-out in the comparison of Progressive-Socialism and the NAZI Party, antisemitism and a compromise with Islam-Allah is steadily growing within the Democrat Party while the Democrats hatred for the Nation of Israel is undeniable. Why do Progressive-Socialist-Democrats…

If one studies the Holy Scriptures under the tutelage of the Holy Spirit and if one performs a comparative analysis of Islam, its genesis, the Quran, "The Genesis" of the Scriptures, they will readily come to the irrefutable conclusion that Allah of Islam is NOT the God of the Bible but Allah is Lucifer/Satan manifest in Time.

The History of Allah condensed…

It was Allah-Lucifer who was positioned as God’s chief cherub angel in the Kingdom (Ezekiel 28:11-17) and it was Lucifer that coveted God’s dominion, power and worship that God received from His faithful angels; therefore, Lucifer orchestrated a coup against God and failed miserably. Lucifer and his allies were extricated from the Kingdom (Revelation 21:27; Isaiah 14; Ezekiel 28; Revelation 12:7-9) and God the Son was commissioned to take elements from the realm of the Spiritual World and fashion them into matter that is visible and invisible within the constraints of Time/physics (Hebrews 11:3; Colossians 1:15-20; John 1).
From this constituent matter, Jesus Christ formed our Universe, Time, Earth, the human genome. Lucifer was placed upon the Earth along with human KIND and the cosmic struggle between God-Yeshua and Lucifer was initiated in The Garden (Genesis 3:14). Lucifer/Satan was extremely active upon the Earth subsequent to his success in The Garden and at Satan’s behest, mankind revolted against God with assistance from the Nephilim in the days of Noah and man became extremely wicked (Genesis 6).
The wickedness of man and the success of Lucifer was so great that God refused to set-apart a people-group (the Nation of Israel) through whom He would bring forth His Messiah to defeat the works of Lucifer/Satan (1 John 3:8); therefore, God flooded the entire earth and eradicated the presence of mankind, the wickedness of the Nephilim, with the exception of eight, Noah and his family (Genesis 6:8).

The Promise subsequent to The Flood…

God the Father promised Abraham that it would be though Abraham’s seed that He would bless the entire Earth with the coming Messiah who would reconcile mankind back to God through the forgiveness of sin (Genesis 12:3). Abram (Abraham) and his wife, Sari (Sarah), waited patiently for the promised child but as Abraham was already very old and his wife, Sarah, was barren and well past her children-bearing years, Abraham and Sarah grew impatient with the Lord and at the behest of Sarah, Abraham entered into an adulterous affair with Sarah’s handmaiden named Hagar.
Hagar became pregnant with a male child via Abraham and gave birth to a son named Ishmael. The Holy Spirit of God prophesied that Ishmael and his descendants would be a “wild donkey” of a man and that his hand would be continually against his brethren (the children of Israel) (Genesis 16:12). Ishmael and Hagar, at the request of Sarah, were banished from the presence of Abraham and thus begins the genesis of the Ishmaelites, the genesis of the Arabic people, the genesis of Muhammad, the genesis of Islam via Ishmael.
God’s promise of a chosen and anointed Child, Messiah-Jesus, that would bless the entire Earth came to fruition when Sarah was found to be with child by Abraham and gave birth to a son named Isaac. The Holy Spirit anointed Isaac as the child of promise through whom the Covenant of God with Abraham-Isaac-Jacob (Israel) via Messiah would be fulfilled. It is Isaac that is the child of promise and Isaac is also the father of Jacob later named “Israel”. Ishmael, born of Abraham and Hagar, is NOT the son of promise but Allah-Satan found, in Ishmael, the perfect introductory scenario-vessel to garner praise and worship from mankind, praise and adoration that Lucifer had so desperately coveted in the Kingdom of God prior to his banishment for sin.
"Then God said, “Yes, but your wife Sarah will bear you a son, and you will call him Isaac. I will establish my covenant with him as an everlasting covenant for his descendants after him. And as for Ishmael, I have heard you: I will surely bless him; I will make him fruitful and will greatly increase his numbers. He will be the father of twelve rulers, and I will make him into a great nation. But my covenant I will establish with Isaac, whom Sarah will bear to you by this time next year.” When he had finished speaking with Abraham, God went up from him." Genesis 17:19-22

Muhammad of Islam is a 7th-Century marauding thief, liar, murderer, pedophile, who plagiarized portions of the Jewish Torah, perhaps oral traditions as well, to construct the Quran in hopes of enticing the Jews in Medina to follow The Book or the Way of Islam. When the Jews rejected Muhammad, he began to mistreat, enslave, murder, the Jewish people and Christians and soon the Islamic Caliphate was manifest and for 1400-years Islam butchered some 270-million non-Muslims until stopped in 1924 (John 8:44).
The god of Islam, Allah, is Satan who wears the title of the Arabic moon god (2 Corinthians 11:14). Allah finds worship, praise, legitimacy, through Islam’s relationship with Abraham and Ishmael. Islam is a death cult that hates, with unconscionable fervency, the Jewish people, the Israelite, the Nation of Israel, the Christian, Jesus Christ, God the Father and the Holy Spirit.
It is Allah via Islam-Iran and Iran’s allies i.e. Russia-China-an Arab coalition, that will initiate the coming Apocalypse in Jerusalem, Israel – a horrific nuclear war and Yeshua-Jesus will be victorious over the armies of Allah and then Jesus will initiate His Millennial Reign over the Nations of the Earth from Jerusalem, Israel.

I have said that to say this…

Not only is the Progressive-Socialist-Democrat Party in the United States a modern-day "type" of Hitler’s NAZI Party but the Progressive-Socialist is also allied with Satan-Allah as the Party supports and defends the demonic cult of Islam and permits representatives of Islam, those who HATE Israel, to serve in the United States Congress, various jurisdictions in America and legislate-openly advocate for Israel’s demise.

Anyone who supports by vote or voice the Progressive Socialist Democrat Party of the United States also supports and promotes…
Progressive-Socialism i.e. the Democrat Party is the Party of Satan-Allah and only suffering, loss and death lie in its wake. God the Father has promised via His Covenant with Abraham (Abram), Isaac and Jacob AKA Israel…
“I will make you into a great nation, and I will bless you; I will make your name great, so that you will be a blessing. I will bless those who bless you and curse those who curse you; and all the families of the earth will be blessed through you.” Genesis 12:2-3
Repent of sin, believe on the Name of Jesus Christ for the forgiveness of sin and find life in Eternity with God the Father forever! (John 14:6; John 3:16) 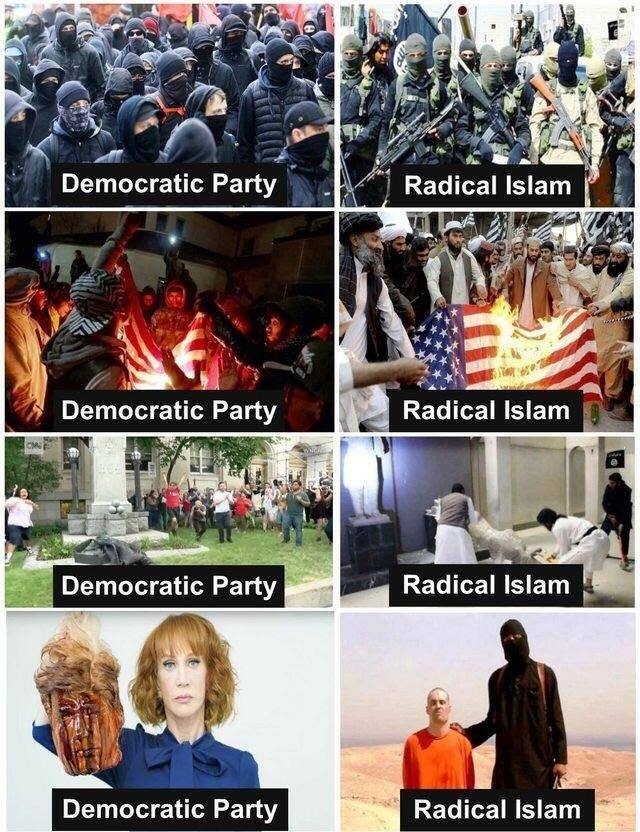