Happy_Killbot 1565 Pts March 20
As an agnostic-atheist and former Christian, I once was very guilty of doing this, and I still see it all the time in believers.

It seems to me there are 3 types of believers, which I will call casual, moderate, and fundamentalists. Where casual are those who engage in religious practices for cultural reasons, i.e they might go to church on some occasions and follow the culture and celebrate the holidays, but don't take a particularly strong stance on the matter of the existence of god, moderates are those who take a metaphysical interpretation of their religion, believing that what gives it value is the underlying message and the behavior that stem from them, and the fundamentalists are those who take a literal interpretation and will not accept that it in any way can be false.

For example, many Christian fundamentalists are also young-earth creationists, who believe that the earth and all life was created about 6,000 years ago, and they will twist and deny the overwhelming evidence that this is not the case, for example light from distant stars, the geological record, all of the fossils, ice cores, craters on the moon, archaeology, etc. They do this because the genealogical record in the bible and the age of each of these people can be extrapolated to determine an approximate age of the earth, if you assume that the bible is true. In other words, they are starting with the assumption that the world was created in 7 days, and then reaching the conclusion that the earth must only be around 6,000 years old. This means that if the assumption is invalidated, the claim goes with it, thus they must do everything in their power to deny the reality that the earth and all life did not come to be in just 6,000 years, or else the bible must be literally false and their world view would take a mortal blow.

When I was a practicing Christian, I fell for all of these stories too, a lot of the ridiculous things they conclude simply don't stack up to rigorous examination. When I was in high school, we had an organized debate on the topic, and I took the side of creationism. This probably did more to convince me that it was all BS than most other things, because as I studied and watched actual debates by actual professionals, I realized that the arguments just didn't stand up to scrutiny, because I simply couldn't find a single argument that couldn't be rebutted with minimal effort. In the end, me and the other students I was working with ended up resorting to a gish-galloping strategy of just throwing out all of this evidence that was mostly made up, some was even contradictory.

Then of course there is the god-of-the-gaps fallacy, where someone asserts that because we don't know something, that someone or something must be controlling it or behind it. No matter how much we know, this will always stand as a possibility, because the limits of our knowledge will always be finite, there will always be information that is just beyond our grasp as a consequence of physics and the universe being finite despite being unthinkably huge.

Of course we could speculate all day for years on the validity of any scientific claim or discovery, and even discuss the philosophical implication of those discoveries, but all of this is a bit redundant, because the real killer of the theists position is pragmatism. Simply put, when you know the facts you can use them for useful purpose. For example, if you believe that praying for something will result in your prayers being answered, you might be surprised when you discover that they are not, and at the same frequency as if you had prayed to any other god or even just an inanimate object. You might however discover that praying has a placebo effect, and knowing this and what a placebo can do is more than enough to get the same results in other ways. Knowing what is true and what is made up is always more useful than blind speculation.

It is a unique combination of cognitive dissonance and denial that lead to the theist's worldview, they must delude themselves into believing that reality isn't what it actually is with religious belief to solve a problem which doesn't exist without religion in the first place. Religious beliefs have no value that can not be gained elsewhere, or can not be achieved in a more robust and coherent way. Theists conclude that there is agency where there is no proof of any existing at all, they see the world as being the result of intelligence and randomness as being deliberately designed, even without the slightest evidence of that being the case. Rather they conclude that the seemingly non-random events were in themselves proof of agency.

Consider these two pictures, one is random from generated numbers, one I drew myself, and another is from typing random numbers. Vote on which you think is  the true random picture: 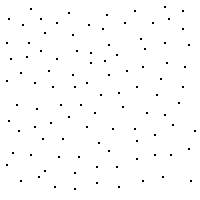 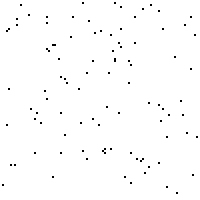 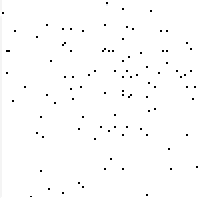 At some point in the distant past, the universe went through a phase of cosmic inflation, Stars formed, planets coalesced, and on at least one of them life took root and developed into the human race, who conquered fire, built societies and developed technology .
All of that so we can argue about nothing.
not random.png 1.1K
random.png 1.1K
selected random.png 1.4K