Another current pandemic that we can actually do something about!

Dihydrogen Monoxide (DHMO) has for decades claimed the lives of thousands of people on a global scale, far more than any other pandemic in history combined. And still, no one ever appears to do anything about it! Dihydrogen Monoxide is colorless, odorless, tasteless, and often called "The invisible Killer'  for that reason. The vast majority of fatalities are a direct result of accidental inhalation of this. Some of the other deaths are a result of severe withdrawal symptoms as a result of going cold turkey when one has somehow managed to build up a strong tolerance for this chemical. Other issues that have been observed with this chemical after long-term exposure are excessive sweating and urination, electrolyte imbalances, tissue damage, gassy feelings, nausea, and of course severe withdrawal as previously mentioned above regarding those that are dependent.
Other empirical observations surrounding DHMO involve how it is the main constituent of acid rain, has the ability to cause severe burns, is a contributory factor to the greenhouse effect, causes many metals to go rusty, and has even been found in the tumors of many cancer patients, among many other things. The contamination has reached pandemic proportions and indeed makes the Covid Pandemic conspiracy look like an amateur in comparison. DHMO can be found in every stream, river, lake, and reservoir not only in the US but in every country on the globe. It's even been found in North and South Poles.
Despite the prevalent dangers that plague our globe many governments continue to refuse the banning of this product as, of course, once again the economical benefits far outweigh the risks according to them. DHMO is at the center of a multibillion-dollar industry. It's used as an additive in several processed foods, found in solvents and coolants, has been used on fires, and a lot more. Isn't it time we actually did something about this pandemic?
If yes, then why, if no, then why not? 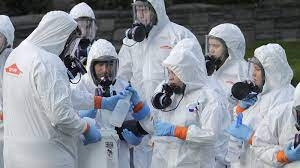