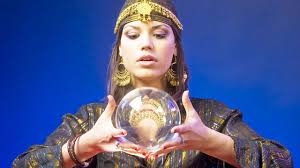 My dead great-great-grandfather told me they are faking it.
psychic.jpg 7.8K